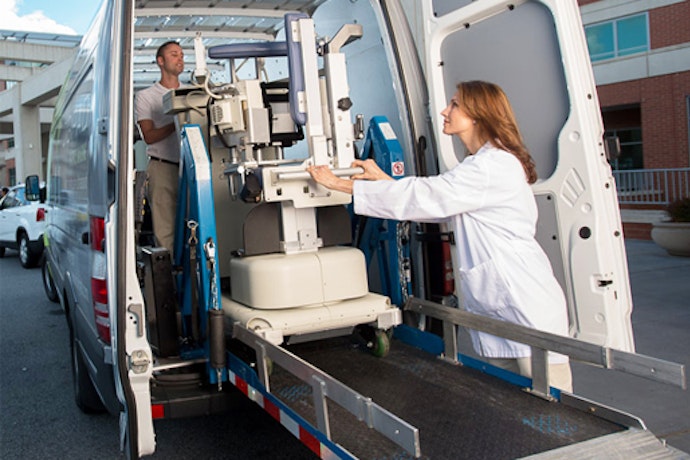 I cannot stress how easy it is to use the Verizon Connect solution. They offered in-depth training but it wasn’t really needed because the solution was that easy to use.
LaToya Jones
Operations Service Administrator

Digirad is a global leader in the development, manufacturing and distribution of solid-state gamma cameras for use in nuclear medicine as well as other general medical applications. With a fleet of over 140 vehicles spanning 20 states, the company provides a wide array of mobile imaging solutions to both private and integrated physician offices, clinics and hospitals.

LaToya Jones serves as Digirad’s Operations Service Administrator and oversees a wide variety of duties including billing, managing vehicle registrations and service and ensuring fleet performance is running as smoothly and efficiently as possible. One major challenge for Jones and the Digirad team is that their drivers are allowed to take their vehicles home at the end of the day which presents a few logistical issues when it comes to tag renewals, service reminders and other services the technician is responsible for. Because monitoring over 140 vehicles can be challenging, Jones took the opportunity to review several telematics competitors, comparing their offerings both on paper and in side-by-side pilots. Ultimately, Digirad selected Verizon Connect as their vendor of choice in February 2015.

Digirad was with another GPS tracking services provider for two years and experienced several problems in key areas prompting them to search for a new telematics vendor. For Jones and the Digirad team, these problems and frustrations lived in three specific areas.

Based on the pain points mentioned above as well as a few more Jones and the Digirad Team experienced, they began their search for a new telematics vendor. Jones constructed a comparison matrix that allowed her to visually compare each solution’s offerings and capabilities and help to make her final decision.

For Jones and Digirad, there were a number of decision criteria, but first and foremost, it had to be easy. “I wanted to be able to log in, click on a vehicle, locate it and find out everything I needed,” says Jones. At the top of her ‘must have’ list was the ability for the solution to be straightforward, fast, easy and intuitive. She adds, “It’s always best to have something that is simple and not complex. We want to make everyone’s job easier, and at Digirad we want to provide the highest levels of customer service in the most-timely manner, so easy is a big part of being able to deliver that customer service.”

Beyond ease-of-use, Jones and Digirad management had a number of other criteria that ranged from substantial to smaller details. Their executive team and supervisors came up with a list of items they wanted but were not receiving from their current solution. Specifically, they were looking for capabilities around key fobs that allowed for Digirad to easily identify which driver was operating a specific vehicle; in-cab alerts that notified them of speeding events or any harsh driving behavior; reporting that allowed them to generate summary reports by drivers’ days and weeks; specific driving location identification instead of just an address on a map; faster information updates to the solution and driver scorecards that easily detailed results on a per-driver basis.

Jones adds, “Customizable dashboards were also critical. Our supervisors are in the field quite often, and they need to be able to have information at their fingertips without having to find a computer and log on.”

During Digirad’s search, price was less of an issue. “I knew what we were paying for what we were not getting,” Jones mentions. The price Digirad was paying for their current provider was not indicative of the value they were receiving – they were paying too much and receiving too little. During the search, Jones mentions, “I used what we were paying today as the benchmark to see what others would offer for a similar price.” During the review, Jones and Digirad considered five other GPS tracking companies in addition to Verizon Connect.

What made Verizon Connect stand out

In Jones’ words, “Throughout the whole 6-week test process, Verizon Connect just did everything right. For starters, they came out to personally install their devices, rather than just mailing them to me. And they didn’t charge for those installations. But it was much more than that.” For Jones and the Digirad team, Verizon Connect stood out in other areas as well, including…

For Jones and the Digirad team, it wasn’t hard to select the final vendor. “It was between Verizon Connect and another named telematics provider. The competition was close on paper, but not when you logged in. When you looked at the two systems and how each worked, there was no comparison. Verizon Connect looked better, it is easy to use because it is highly intuitive, and I can click one button and find everything I need,” says Jones. Beyond this, Jones felt Verizon Connect’s design was pleasing and allowed for simple avatars for people and trucks that easily let you know what asset was being tracked. “I cannot stress how easy it is to use the Verizon Connect solution,” mentions Jones. “They offered in-depth training but it wasn’t really needed because the solution was that easy to use.”

During the vendor selection, Jones ran side-by-side pilots of all the vendors to determine which vendor demonstrated the capabilities Digirad not only needed but was also looking for. Jones added “I did all the demos at the same time and the difference between Verizon Connect and the others was significant. Toward the end of the test period, I wasn’t even paying attention to the other vendors. They would ask about the test and I would let them know it was going OK but I always had a lot of things to share, tell or discuss with the Verizon Connect team.”

A number of events occurred during the selection process that impacted Digirad’s choice of Verizon Connect. “Verizon Connect took the time to set up our own personal demo platform. One of the competitors gave us access to their general demo accounts with more than 100 other vehicles being tracked all across the United States. We had no way of knowing which vehicles belonged to Digirad,” says Jones. Delivering on commitment was absolutely important to Jones and the Digirad team. “Verizon Connect never made promises they didn’t deliver on, unlike the one company who talked at length about tracking fuel consumption but then—when asked why we could not see any details about fuel consumption—told me that their system does not work for diesel vehicles. This was after I had told them all of our Sprinters are diesel,” Jones says.

What could have Verizon Connect done better?

Jones’ answer was offered up very quickly. “Nothing, they were amazing. Verizon Connect exceeded all of my expectations and they blew everyone else out of the water. Even though their original proposal was the most expensive option, they were still a very strong consideration. After negotiations, the price difference was still $2, but it has been very well worth it.”

In Jones’ view, the partnership with Verizon Connect has been great. “Verizon Connect has been amazing. Our biggest challenge was to install 144 units in vehicles located in different states. Where it was needed, Verizon Connect had their installers go to accounts while the technicians were there working in the field,” adds Jones. To help make the installation process smooth and efficient, Digirad’s technicians would leave their keys with the receptionist and Verizon Connect would install the devices while technicians were at work, simply returning the keys when the installation was completed. “The way they worked out logistics was awesome. I am really happy with our decision, and with the entire Verizon Connect team. They have helped deliver a higher level of knowledge, which leads to higher fleet safety for us, savings for Digirad, and a positive reflection on my recommendation of Verizon Connect,” says Jones. “If I can help Digirad save money by having a strong system to monitor overall fleet safety and coach drivers, it opens up dollars for other things. I’m pleased about our choice of Verizon Connect for the company. And for me!”

I cannot stress how easy it is to use the Verizon Connect solution. They offered in-depth training but it wasn’t really needed because the solution was that easy to use.
LaToya Jones
Operations Service Administrator
Get a demo