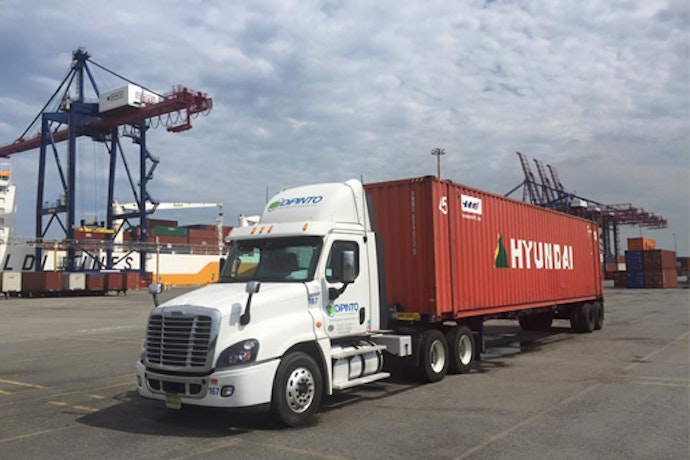 Now all our deliveries are being made on time, so our customers are happy and will keep working with us. Also, our drivers are back at a decent time so we are spending less on overtime.
Ken Fentress
Operations Manager

Fuel prices may be on everyone's mind, but payroll remains by far the largest expense in any trucking operation. At DiPinto Brothers, payroll was inflated by too much overtime, yet it had no way of knowing the accuracy of its timesheets or how efficient its operations really were.

The company implemented the Verizon Connect GPS fleet tracking solution across its fleet in order to gain control of payroll and overtime expenses. By improving its ability to plan routes, keep track of vehicle activity and better respond to customer demands, DiPinto Brothers has saved big.

Suffering Due to Manual Processes

DiPinto Brothers specializes in delivery of containers to and from the ports in the New York area. It operates over thirty vehicles that travel throughout the Northeastern seaboard. From its 115,000 thousand square foot facility in Edison, New Jersey, its fleet racks up 133,000 miles per week. But the economic slowdown meant it was struggling to maintain profitability.

"As diesel is $4.75 a gallon, you have to route accurately so good planning is vital," said Puya. "It's all about taking the most direct route so you don't waste driver time or fuel."

In the recent past, routing was wholly manual – dispatchers pinned the scheduled deliveries on a chart and relied on the phone for updates. To make matters worse, driver timekeeping was done on paper. Each driver turned in a log stating hours worked, deliveries and pickups made, and overtime hours due. "If a driver didn't call in or couldn't be reached, dispatchers would be at a loss as to what was happening," said Puya.

The company spent many months researching the market to find the right fleet management system. After considering dozens of options, it settled on the Verizon Connect GPS fleet tracking solution. "Verizon Connect was by far the best product on the market in terms of cost and features," said Puya. "The pricing was very reasonable compared to most of the other possibilities."

DiPinto Brothers reported a series of benefits from the implementation of the fleet management software. On the payroll front, the company is no longer paying out wages and overtime based on driver estimates. That added up to almost $200,000 in savings in the first year.

Using Verizon Connect, dispatchers can monitor the location of all vehicles night and day. For example, an alerting feature enabled the company to set a two-hour limit for trucks waiting at a pickup or delivery site. Previously, drivers might end up sitting at one spot for many hours. This led to heavy overtime costs as well as lost revenue.

"Before, we would have to pay the driver many extra hours of overtime yet would not be able to bill the customer as we often didn't find out until well after the fact," said Puya. "By alerting the customer before the two hours are up, we ensure we get paid appropriately for our services."

In the case of any billing dispute, Puya can pull up a report which shows when a vehicle got there, when it left and every other necessary fact. The customer can even be shown a complete replay of the route via Verizon Connect Route Replay feature. "Our Verizon Connect reporting capabilities provide irrefutable proof of pickups and drop-offs," said Puya. "This has made a major impact on our overall profitability, and heightened our relationships with customers."

It is also much easier to monitor driver lunch hour habits. Under a manual system, the organization had to accept whatever was recorded in the driver logs. Puya suspected that these were not completely accurate. This has been borne out in the return on investment. "Improved payroll accuracy has saved us approximately one hour per vehicle per day," said Puya.

Further reports have proven just as useful. Dispatchers can see at a glance the amount of idling time of each vehicle. DiPinto now brings up idling issues at safety meetings, showing each driver an exact rundown of idling periods. The company provides incentives to drivers if they are under a certain amount of idling per week.

"Verizon Connect has helped us lower idle times by about 45 minutes per vehicle per day and to monitor stop by stop how long vehicles are at each site," said Puya. "In one year, that added up to over $23,000 in fuel costs. That's why we've recommended Verizon Connect to four or five other companies who are now implementing it."

Now all our deliveries are being made on time, so our customers are happy and will keep working with us. Also, our drivers are back at a decent time so we are spending less on overtime.
Ken Fentress
Operations Manager
Get a demo

8 Important Signs that You're Ready for Fleet Vehicle Tracking

8 Signs You're Ready for Telematics

The 2022 Fleet Technology Trends Report uncovered new data about how the pandemic has changed the way that people work.

8 Important Signs that You're Ready for Fleet Vehicle Tracking

8 Signs You're Ready for Telematics

The 2022 Fleet Technology Trends Report uncovered new data about how the pandemic has changed the way that people work.