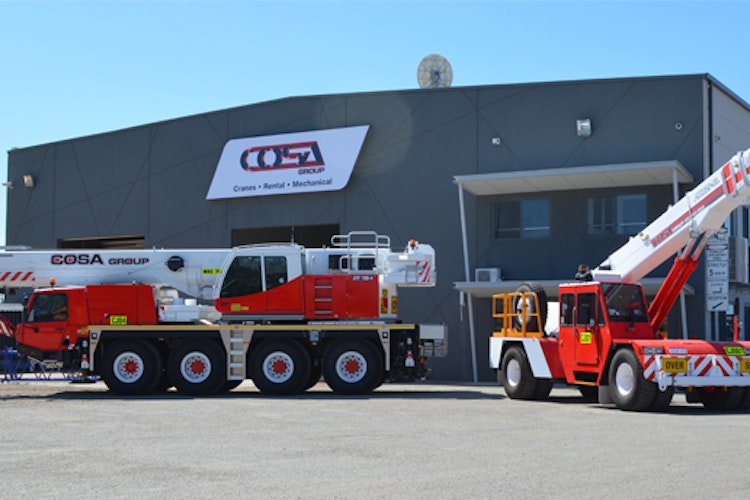 Since the introduction of Verizon Connect we’ve dropped all of our machines speeds by 10Km an hour, which has saved our fuel burn and it has also made the guys more aware of safety.
Clint McClure
Director

Company founders Clint and Sarah McClure established COSA Cranes & Engineering in 2006. With a growing business spanning the farthest reaches of Australia, they lacked visibility of their fleet of cranes, trucks and light commercial vehicles. In particular, they were concerned about the safety risks of their staff working in remote locations. This led to the implementation of vehicle tracking with Reveal.

“Our cranes and trucks would service some of the most remote parts of Australia. We looked into GPS tracking to make sure our employees were safe,” said Clint McClure, Director, COSA Cranes & Engineering.

COSA Cranes needed to take the guesswork out of their billing. The hire of their machines is time based, which means they need data around hours, to correctly charge customers.

If COSA Cranes employees incorrectly filled out job dockets, they couldn’t invoice their customers for the hire times, potentially missing out on revenue.

Now with GPS vehicle tracking, COSA Cranes can verify arrival and departure times, which allows them to accurately bill their customers. Also, if a customer disputes a bill, they have data to resolve the concerns.

“We know human error can be made on job dockets and plus the guys could lose track of time. So if the guys have made a mistake on filling out their job dockets, we can check Reveal. It has made a big improvement to our invoicing.”

Since the implementation of Reveal, COSA Cranes have used the data to coach their employees on improving their driving behaviour, contributing to significant savings in fuel.

“Since the introduction of Reveal we’ve dropped all of our machines speeds by 10Km an hour, which has saved our fuel burn and it has also made the guys more aware of safety. Now, we don’t have incidents on the road and our fuel consumption has dropped by up to 7%.”*

Peace of Mind When Traveling to Remote Locations

The safety of COSA Cranes employees is of the utmost importance. Without visibility of their vehicles and employees, it was hard to know if their employees and vehicles were safely on the way to the job sites.

With a reliable GPS fleet tracking system, COSA Cranes have real-time visibility of their vehicles via the live map. They can have peace of mind knowing where their employees are and if any issues arise they can attend to them.

“We can keep an eye on how the guys are tracking; if we haven’t seen the vehicles move in a while we know we may have an issue. Reveal is a great way to make sure our employees are safely on the way to the job site.”

Since the implementation of Reveal, COSA Cranes now have visibility of their entire fleet. They have established better driving habits, reduced fuel by 7% and they can bill their customers against correct times.

“We’ve had a good experience with Reveal, and in my eyes they are definitely the best,” said Clint McClure, Owner, Cosa Cranes & Engineering, Australia.

Free demo
Find out how our platform gives you the visibility you need to get more done. Get a demo.

Since the introduction of Verizon Connect we’ve dropped all of our machines speeds by 10Km an hour, which has saved our fuel burn and it has also made the guys more aware of safety.
Clint McClure
Director
Get a demo
Progress
We use cookies and tracking for navigation, user feedback, analytics, marketing, and third-party advertising. You can manage cookies (and opt-out) via the link at the bottom of our page at any time. Click to manage cookies or learn more. Click to opt-out or learn more.
Accept all cookies