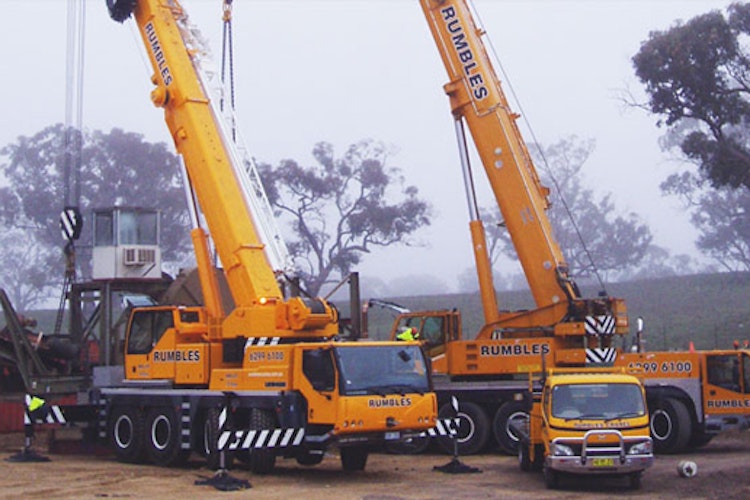 Overall we’re completely satisfied with Verizon Connect Reveal. It’s improved the productivity of our drivers, it provides an extra level of customer satisfaction and it’s become a key part of what we do and how we run our business.
Donovan de Ligt
Operations Manager

With over 7 tower cranes and 15 mobile cranes, visiting five or six sites a day, it was difficult for RAR to keep track of the location of all its cranes. It was impossible to quickly determine if a crane showed up to a job, how long it was there for and if the job was completed. “It was a customer service problem,” says Donovan de Ligt. “Customers would call asking, ‘Where’s my crane?’ We couldn’t answer them without hanging up to call our driver. The back-and-forth phone calls frustrated both the customer and our drivers.”

Further to that, RAR was spending exorbinant amounts of money on fuel from engine idling. “The guys would get to work, turn on their cranes then grab a coffee and breakfast while it warmed up,” says Donovan. “It was costing us $100 a day.”

These problems prompted Donovan to acquire Reveal, a GPS tracking solution, to help manage fleets in real-time. Installing the platform on the phones and iPads of every manager and six of his crane drivers now allows Donovan and his team, to easily identify the current location of his cranes. “Now, If a customer calls, I can quickly access a real-time update to see where the crane is without hanging up,” he says. “We sound more professional and can instil confidence in the customer that we know what’s going on with our cranes.”

The simple and easy-to-use platform with visual reporting means Donovan can anticipate and quickly respond to customer queries. He has also noticed a decrease in the number of customer calls which he attributes to changing driver behaviours. Donovan has found that since installing Reveal, his drivers are showing up to jobs on time more frequently. He also enjoys instant alerts when a crane detours off track, is late to a job or stops moving. “It’s a quick and effective way of staying up-to-date,” says Donovan.

Aside from the benefit of knowing where his cranes are, Donovan has also seen significant cost savings. The Reveal customer service team educated his drivers on fuel wasting behaviours, including idling. Donovan estimates RAR are now saving approximately half an hour worth of diesel across each vehicle per day from warm-up and idling.

“Overall we’re completely satisfied with Reveal,” says Donovan. “It’s improved the productivity of our drivers, it provides an extra level of customer satisfaction and it’s become a key part of what we do and how we run our business.”

Overall we’re completely satisfied with Verizon Connect Reveal. It’s improved the productivity of our drivers, it provides an extra level of customer satisfaction and it’s become a key part of what we do and how we run our business.
Donovan de Ligt
Operations Manager
Get a demo

ACPL Saves Up To 5% on the Efficiencies of Using...

How to reduce your fleet expenses

While there may seem to be hundreds of choices when deciding which GPS tracking software to install on your fleet, the...

Earth Moving Business Save $10,000 Monthly on Fuel With Fleet...

Bonelli Plant Hire has been successfully operating for more than 35 years in the earth moving and construction industry...