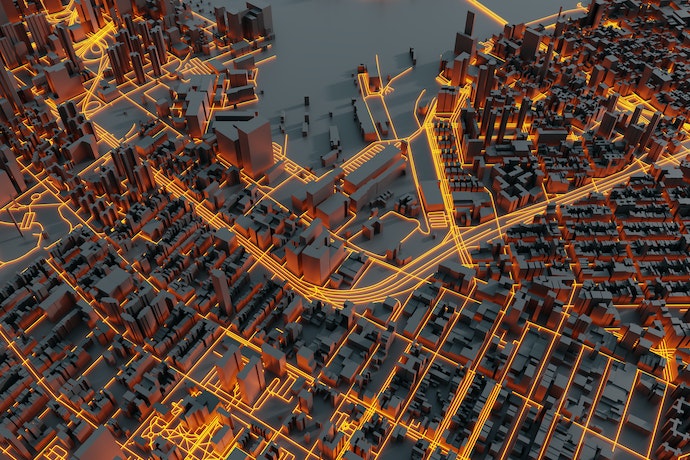 More people than ever are now living in cities and urban areas. It’s estimated that more than four billion people of the total world population live in urban areas and it wasn’t until just recently, in the mid-2000s, that urban populations surpassed those of rural areas (Urbanization). By 2050, it’s predicted that more than eight billion people will live in cities. North America in particular has high concentrations of people living in urban areas and as populations of North American cities continue to grow, the environment and economy are facing serious consequences.

The need to develop innovative ways to make the exponential growth of cities sustainable is more important than ever. European cities like Barcelona and Amsterdam began adopting the concept of “smart cities” years ago. North American cities are now beginning to catch up to smart city initiatives including:

What is a smart city?

Smart cities use data from the Internet of Things (IoT) to make decisions about city planning. Smart cities adopt technology and analyze the information it provides to enhance quality of life, spur economic development, and develop efforts around sustainability. Smart technology and big data analytics are a key element to smart city planning - it involves analyzing extremely large sets of data to better understand pedestrian and traffic behavior and then using that date to make informed policies for infrastructure and city planning.

Why are smart cities important?

Smart cities aim to maximize available resources and focus them on developing creative solutions for tough city problems. These efforts will ultimately impact public health and safety, the environment, and local and global economies. Successful smart city projects have proven that collaboration is essential - citizens, government, and private businesses must all work together to make smart cities effective.

According to the International Data Corporation, $158 billion is estimated to be spent on smart city planning by 2020. In 2015, the United States Department of Transportation (DOT) launched the Smart City Challenge. 78 cities applied to contribute to the challenge and the DOT developed a comprehensive report that answered some tough questions and posed ideas for how to create integrated, first-of-their-kind smart cities that use data and new technology to improve quality of life and business.

Facilitating the movement of goods into and out of cities was one of the common themes the report found across 78 participating U.S. cities. Traffic congestion was a major contributing factor to the challenges of transporting goods. As trucks sit idle in city traffic on freeways and arterial roadways, fuel is wasted, deliveries are delayed, and the cost of doing business rises.

Denver was involved in the smart city research and report and they proposed plans for adaptive signal controls and smart freeway ramp metering. This approach was designed to optimize traffic flow on major highways and adjust traffic patterns using data received from sensors. Part of their plan proposed that data collected from connected vehicles should be used to develop dynamic traffic signal controls. Denver was awarded $6 million to upgrade its traffic management center and build a connected vehicle network.

With more than 15 million trucks on the road that contribute significantly to traffic congestion, it critical for trucking companies to play a role in smart city efforts, traffic management, and connected vehicle networks.

What role do fleet technologies play in smart cities?

Find out how the City of San Jose, CA is using GPS fleet tracking software as part of it's Smart City transformation. The city has a fleet of 2,750 vehicles and assets – spanning police, fire, transformation, public works and more – which must all be maintained, tracked and secured.

V2X technology, or vehicle-to-everything, makes every automobile on the road smarter and safer by giving them the power to “communicate” with the traffic system, including other cars and infrastructure. V2X can notify drivers of dangerous weather conditions, accidents and traffic congestion nearby, and other dangerous behaviors happening in close range. Vehicle-to-everything communication is the future of autonomous driving, but the V2X market still has a far way to come. Similarly to V2I and V2V technology, V2X will be most effective when every truck, bus, car, motorcycle, and even bicycle, comes standard with this connected vehicle technology.

What else can smart cities do?

Smart cities are paving the way forward to a more efficient, economic, and environmentally friendly future. Smart grids, smart buildings, smart street lights, and more will all be something we begin to see in the near future to increase the energy efficiency of cities. Also, as climate change becomes more and more relevant, cities will need to find more ways to take advantage of renewable energy to reduce air pollution, Cities in China, South Korea, and Japan could particularly benefit from reducing air pollution through renewable energy sources in their major cities. Autonomous vehicles are another option for smart cities to reduce traffic congestion and air pollution, while improving safety for all drivers and pedestrians on the road.

Growing urban populations are forcing city leaders to take a smarter approach to infrastructure and transportation management. Effectively facilitating the movement of goods as cities expand and congestion increases will require collaboration of city government and transportation companies. Fleet managers already have data and tools available to them that can help. Discover the robust, customizable telematics solutions available from Verizon Connect and how we can help businesses like yours go further.

Learn how fleet management can help emergancy services and first responders. When every minute matters, choosing the...

Learn how fleet management can help emergancy services and first responders. When every minute matters, choosing the...