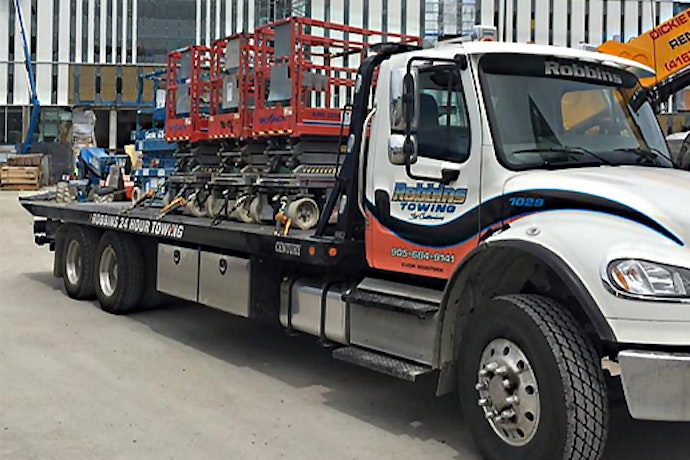 It's an extra two hours per day that's not being wasted on the phone so that we can do more jobs. It's like having an extra driver.
Barry Robbins
Owner

Driving Around on the Company's Bill

Like any towing and recovery service, Robbins Towing of St. Catherines, Ontario has experienced its share of odd experiences leading to amusing anecdotes.

Because they’re a small company with four trucks, the business needs to be on-call 24 hours a day, explains owner Barry Robbins. All the drivers take the trucks to their homes, and each is accountable for his own truck. Still, Robbins knows the importance of being able to keep an eye on them at all times, which is why he’s had a GPS system implemented in his trucks for approximately four years.

The initial impetus for using GPS fleet tracking came from a casual conversation with a friend. “He works as a bouncer at a bar, and he told me he saw my truck going by about eight times one night,” says Robbins. “He thought I must have been getting in a lot of tow business that night. But it turned out that the driver was just using the truck to pick up chicks!”

In this case, a simple talk with the driver was able to help curb the excessive usage, fuel expense and wear on the truck. “I told him, ‘I’m not stealing from you, you won’t steal from me. Don’t drive my truck for no reason.’”

All GPS Tracking Systems are NOT Created Equal

Robbins Towing began with a GPS fleet tracking solution from another provider, which has since gone out of business. Since switching over to the Verizon Connect system, he says he’s realized just how primitive that initial system was. “It couldn’t do nearly the same amount of things we can do now,” he says. “It’s not even in the same ballpark.”

The Verizon Connect system delivers a number of benefits, including turn-by-turn directions, immediate notification of job status, accurate estimated times of arrival (ETAs) to the next job site, totals of jobs left to complete and messaging capabilities.

As might be expected, the first thing Robbins checks when logging on to the Verizon Connect system in the morning is to see any activity his trucks had during the night. “It’s a 24-hour business, but there aren’t calls every night,” says Robbins. “I need to make sure the trucks only being used when there are calls.”

In addition to cracking down on trucks being used for personal use, he’s noticed big savings in his fuel bill, as well as a reduction in idling times thanks to better route planning. Robbins estimates that using Verizon Connect saves three to four minutes for each call, and with responding to thirty calls a day, “it’s an extra two hours per day that’s not being wasted on the phone so that we can do more jobs. It’s like having an extra driver among the group.”

Verizon Connect integrations helps Robbins Towing save money in another area. With traffic laws enforcing fines for anyone caught driving while operating a cell phone or “playing with Garmin,” as Robbins puts it, having their routes pre-programmed helps the business avoid such fines

In order to stay competitive in the market, Robbins Towing must also maintain a high level of customer service, and using Verizon Connect has helped there as well. “We are exact on our ETAs,” says Robbins. “When a call comes in, we are able to route the nearest truck, and get them there quick. We can tell them our guy will be there in nine minutes and he is. And we don’t have routes crossing one another’s paths,” he adds.

The system has also improved his relationships with his contractors. “I show them the system, and they love it,” which leads to more business, says Robbins.“We do on-time freight delivery, but we can only run five tons, so we use the system to time their loads, which we never could do before. The efficiency is phenomenal.”

Being able to resolve such issues can certainly provide Robbins with peace of mind to stay on top of his business, and look back at his experience with humor and hindsight. But nothing beats the midnight phone call he got from one of his drivers.

“At about 12:06 at night, my driver called me to say that the truck had just been stolen from his home,” says Robbins.“I fired up the laptop and called the police.”

Within three minutes, Robbins was able to tell the police the address exactly where the vehicle had been powered down, in the back lot of a parking complex. When the vehicle started up again, the police were already en route, with eight cruisers and a K9 unit. The end of the street was barricaded, and when the police cars’ lights went on, the thieves jumped out of the car and tried to run on foot. “One got away, but the other was caught by the dog and was bit in the butt,” adds Robbins.

As it turned out, all this drama happened because the thieves were hoping to steal an automatic teller machine. Little did they know that Robbins was able to monitor the entire situation from his home as it was unfolding. “Everyone in the house was watching the recovery,” he says.

This episode is just one illustration of how Verizon Connect fleet tracking solution has helped Robbins save time and money, and avoid headaches and damages. “It manages my fuel, my drivers and my PTO,” he says. “I wouldn’t be able to run my company without it.

It's an extra two hours per day that's not being wasted on the phone so that we can do more jobs. It's like having an extra driver.
Barry Robbins
Owner
Get a demo