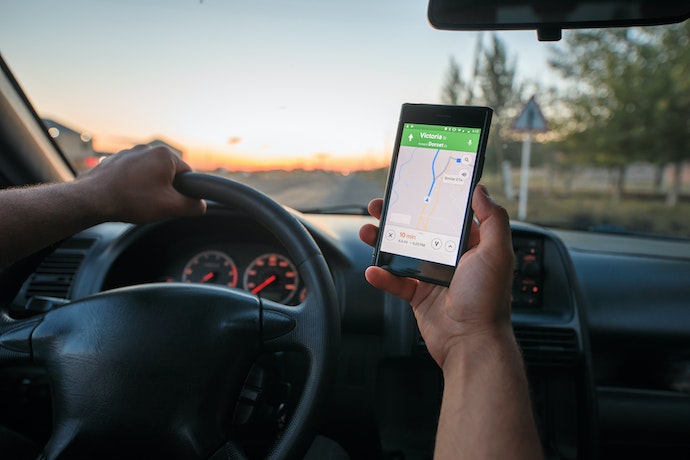 Calculating estimated time of arrival, or “ETA,” means taking a lot of variables into account. Google Maps uses a litany of modern technology — from GPS to mobile apps — but how do they interact to gauge drive time, and how are they becoming more intelligent?

Google Maps uses GPS to monitor the location of an object by “attaching” a GPS tracking device to it. At its simplest level the tracking device is fitted with a GPS receiver and some way to record its current location (latitude & longitude coordinates) at regular intervals. Average speed is then calculated by dividing the total distance traveled by the elapsed time. GPS receivers generally perform the following tasks:

While this calculation gives an average speed, it doesn’t take into account all of the factors that can impact travel time.

GPS data from individual phones is now used by Google Maps to estimate movement and speed of traffic in real time. This data informs Google’s travel time estimates by reducing the average speeds in its calculations during periods of high traffic, or increasing the average speed when conditions are clear. Google Maps also uses posted speed limits and historical traffic patterns to estimate ETA. When you input your destination into Google Maps your original estimate is made based upon posted speed limits, current traffic conditions, and the distance between your starting point and destination. Your ETA will then be updated once you are en route based on updates to traffic conditions and your average driving speed.

Google Maps has a good data set of what the speed limits are supposed to be, as well as data from GPS showing whether the flow of traffic typically exceeds or falls below average, and calculates an average travel time based on a combination of these factors. While GPS technology is nothing new to Google Maps, modern applications mixed with data analytics allow us to gain more intelligence and insight from live and historical GPS tracking data.

Yes, Google Maps monitors traffic, and it has done so increasingly over time, using a growing array of data points, both public and private. Traffic sensors, such as radar, are used by both private companies and government agencies to gather traffic data from highways or major thoroughfares. Radar can provide Google and other tools with data on live traffic conditions - which is then used in determining ETA and making future predictions for travel times in a given area.

Crowdsourcing is another factor that helps Google Maps and other GPS technologies provide accurate ETAs. For example, users can report incorrect driving directions and other issues they encounter while using Google Maps. Google uses information from crowdsourcing to update their predictions and/or create alternate routes.

Drawing from the above sources, Google Maps will update your ETA if you go “off course” or otherwise deviate from the planned route, but this can take time to calculate or can be inaccurate. You can ‘move the blue line’ or drag the default route to change your route and get an updated arrival time based on the change. Google Maps will preselect what it believes to be the fastest route, not accounting for other major variables like stops along the way or left turns, so the intelligence, while impressive, is still limited and lacks many customization options.

Advanced GPS tracking can do even more than estimating travel time and improving driver routes. Software can be used to replay your vehicles’ route history for specific dates and follow the actual routes taken by drivers. This helps fleet managers understand how specific events, such as speeding or stops, occurred and why. You can identify metrics and trends most important to your team, department or across an entire fleet. Fleet managers can run historical reports on up to two years of fleet data to uncover insightful data, support investigations and extrapolate reliable forecasts.

GPS tracking is just one component involved in Google’s ability to better predict travel time and provide ETAs as part of its Maps app. As GPS technology becomes more intelligent using data from traffic sensors, radars, crowdsourcing, and more, getting drivers to their destination on time and via the best route available will become easier.

Verizon Connect is able to do all of the above using data from the two million vehicles using our software today. And you can still access it all though your smart phone (Apple iOS or Android) or tablet! Routing and navigation specific for heavy vehicles or vehicles carrying dangerous loads is a major part of our offering. Our GPS tracking software includes information about how to properly approach an unloading dock or service entrance, which is often missing from consumer GPS solutions. If you are a fleet manager looking to use GPS to improve driver routes and behaviors, contact Verizon Connect today.

How do APIs Work With Integrated Fleet Management Systems?

How Government Fleets use Telematics to Help Reduce Costs

How do APIs Work With Integrated Fleet Management Systems?

How Government Fleets use Telematics to Help Reduce Costs