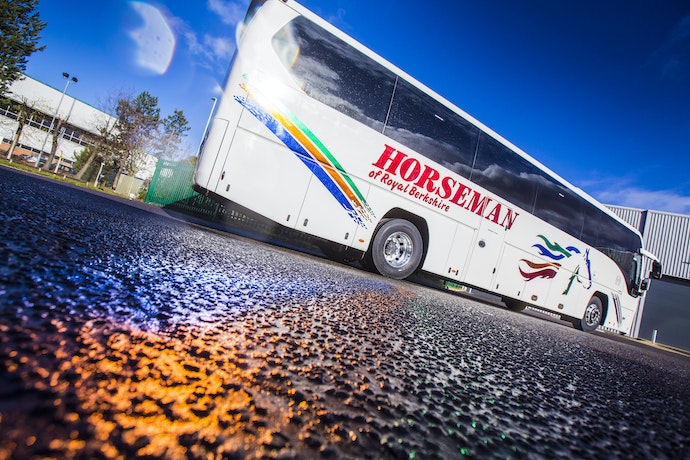 Reveal’s Live Map feature allowed staff to provide immediate answers to any clients requesting updates on the status of their coaches.
Horseman Coaches

Throughout its history, Horseman Coaches has always been an industry leader in establishing coaching excellence. As part of this evolution it has always been eager to embrace new technology to enhance its own services and get ahead of the competition. With that in mind, it decided to implement a fleet management solution that could help streamline its customer service and continue to keep clients happy.

For many years, the coach industry had been in the dark about the location of its vehicles once they left the depot. This caused a great deal of uncertainty, for example, if there were delays, the operations team couldn’t let clients know where their coaches were, what road conditions they were encountering, or when they were expected to arrive. The best answer that could be provided was what time the coach had left the depot – but if they had planned back-to-back jobs, this wouldn’t be a helpful measure and would cause significant disruption to their scheduling.

Horseman Coaches needed a solution that would provide it with near real-time visibility of the location of each of its vehicles, without needing to rely on ringing drivers to check where they were. This would help its operations team deal with issues more quickly, increase customer satisfaction and better forecast its job scheduling.

Additionally, Horseman Coaches wanted a more accurate way to keep on top of its admin and, in particular, monitor timekeeping for its drivers. While it did have tachograph technology, the reports weren’t easy to read, and it relied on speaking with drivers to verify the information. This was hugely inefficient as it reduced the amount of time drivers could spend out on the road earning revenue for the company and serving customers.

As a firm believer in embracing technology, Horseman Coaches also knew it needed an innovative solution to address these issues in order to maintain its high standards of customer service.

Horseman Coaches opted for Verizon Connect’s Reveal fleet management solution in September 2013. This addressed the problems it had, and it has been using the platform ever since, with impressive results.

Reveal’s Live Map feature allowed staff to provide immediate answers to any clients requesting updates on the status of their coaches. Horseman Coaches was also able to integrate the system with live tracker function on its website so customers can log on and check where their vehicles are at any moment in time. This is a move that’s been welcomed by its clients, and customer satisfaction has increased as a result.

Geofencing is another vital feature for Horseman Coaches. In its fleet, it has 53 coaches dedicated to specific rolling contracts, each with five to ten stops per route. It has now geofenced every stop in the network and can deliver an alert whenever a bus has arrived at a stop. This is particularly helpful for school bus routes, where both parents and schools are automatically notified via text if there’s been a delay to the journey and can plan accordingly.

Route Replay is another feature of the Verizon Connect platform that has become invaluable for Horseman Coaches. This allows the company to immediately replay any route which a vehicle within its fleet has taken. This means complaints about coaches not turning up or arriving late – which unfortunately do occur from time to time – can be quashed quickly. Previously if such a situation arose, the operations team would have to call in the driver and spend significant amounts of time analysing tachograph data before it could even determine the validity of a complaint.

As a result of its further integration of Verizon Connect’s Reveal platform, Horseman Coaches has seen significant improvements, increasing its operational efficiency as well as perfecting its customer service processes.

Customers get automatic, proactive updates on the whereabouts of their coaches and, if an issue is raised, the operations team is able to provide an immediate response based on near real-time data from the platform. This increased transparency helps build a higher level of customer satisfaction.

Furthermore, Horseman Coaches has seen a reduction in fuel wastage since introducing Reveal across the business. As reports can be pulled from the platform within seconds, it’s become very simple to track idling across all of its vehicles. Drivers are encouraged to be more cautious with their fuel usage, and as a result, idling has dropped and fuel costs have reduced considerably.

Safety has also improved, as the platform tracks all vehicle movements. This means that if the system records vehicle movement where there is no corresponding Drivers Vehicle Inspection Report (DVIR), the operations team can cross reference the documentation and make sure drivers have completed the necessary forms. This makes compliance checks much simpler across the business.

Having used Verizon Connect’s Reveal for several years, Horseman Coaches has seen multiple benefits from deploying the technology – from higher customer satisfaction, to fuel cost savings, and even improved safety. With the continued evolution of Reveal, from simple vehicle tracking to a sophisticated fleet management platform, Horseman Coaches has been able to take advantage of the continual innovation to provide even better service for its customers.

Reveal’s Live Map feature allowed staff to provide immediate answers to any clients requesting updates on the status of their coaches.
Horseman Coaches
Get a demo