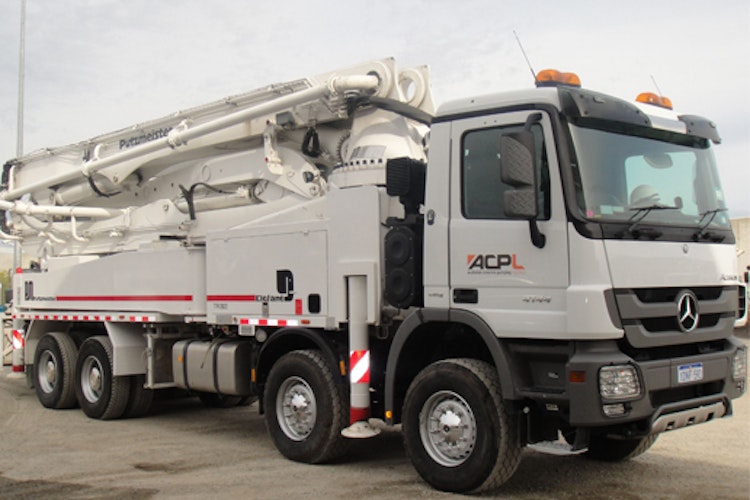 Vehicle tracking is quite handy to verify time spent on site, for invoicing and wages. We also use it to improve efficiency.
Joseph Benfatta
Director

Based in Western Australia, Australian Concrete Pumping Logistics (ACPL) has more than 20 concrete pumping vehicles in their fleet. Having worked on some of WA’s biggest projects and alongside WA’s top companies, they are one of the leaders in the concrete pumping industry.

Joseph Benfatta, Director of ACPL decided to implement GPS vehicle tracking because he was finding it difficult to keep track of his pumping units and justifying hours worked for invoicing. “We installed GPS tracking because it was a sure way of keeping track of staff and machinery, that was number one, and most obvious,” said Joseph Benfatta.

It wasn’t until Reveal had been implemented that ACPL realised the true benefit of GPS vehicle tracking for their business – enhancing our service to our customers, measuring driving performance, machinery service intervals and reducing labour costs.

“Vehicle tracking is quite handy to verify time spent on site, for invoicing and wages. We also use it during the day to try and improve efficiency.”

With Reveal vehicle tracking system in place, ACPL can now monitor and track their entire fleet in real-time. They have accurate data on when and where their vehicles have been engaged. Most importantly they can now verify invoicing, hours worked and improve productivity.

“Reveal opens it all up and makes it very transparent. It’s a good guideline tool for enhancing any transport type business” Joseph Benfatta

ACPL knew they needed GPS vehicle tracking but it wasn’t until the GPS trackers were installed, they realised the true benefit of improving the day to day operations and with a replay mode to solve many invoice queries and staff time sheet accuracy.

“There has been definite benefit to our serviceability, fleet utilization and wage saving. These factors addressed would give us cost savings close to 5%,” said Joseph Benfatta, Director, Australian Concrete Pumping Logistics.

Vehicle tracking is quite handy to verify time spent on site, for invoicing and wages. We also use it to improve efficiency.
Joseph Benfatta
Director
Get a demo

How to reduce your fleet expenses

While there may seem to be hundreds of choices when deciding which GPS tracking software to install on your fleet, the...

Earth Moving Business Save $10,000 Monthly on Fuel With Fleet...

Bonelli Plant Hire has been successfully operating for more than 35 years in the earth moving and construction industry...